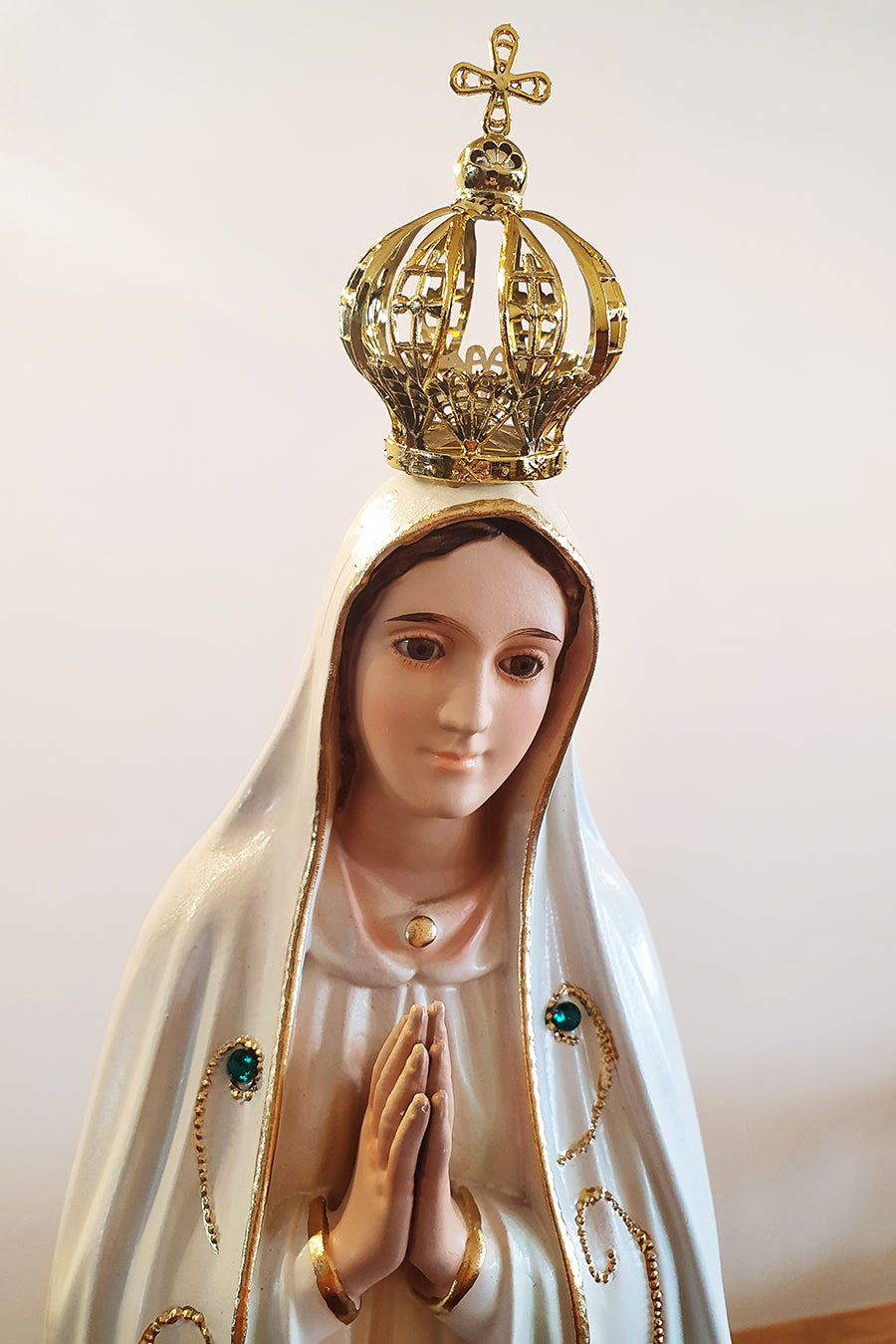 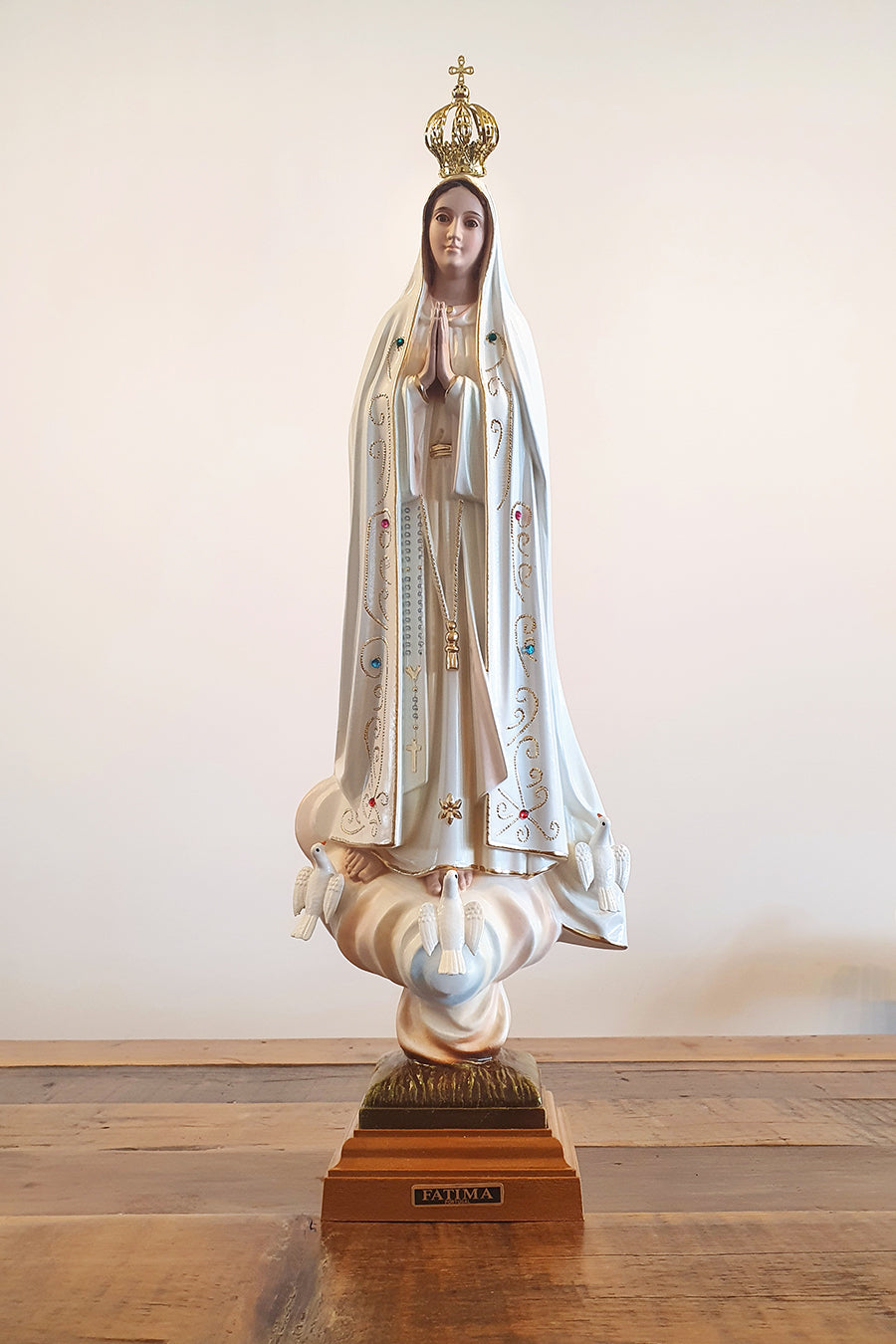 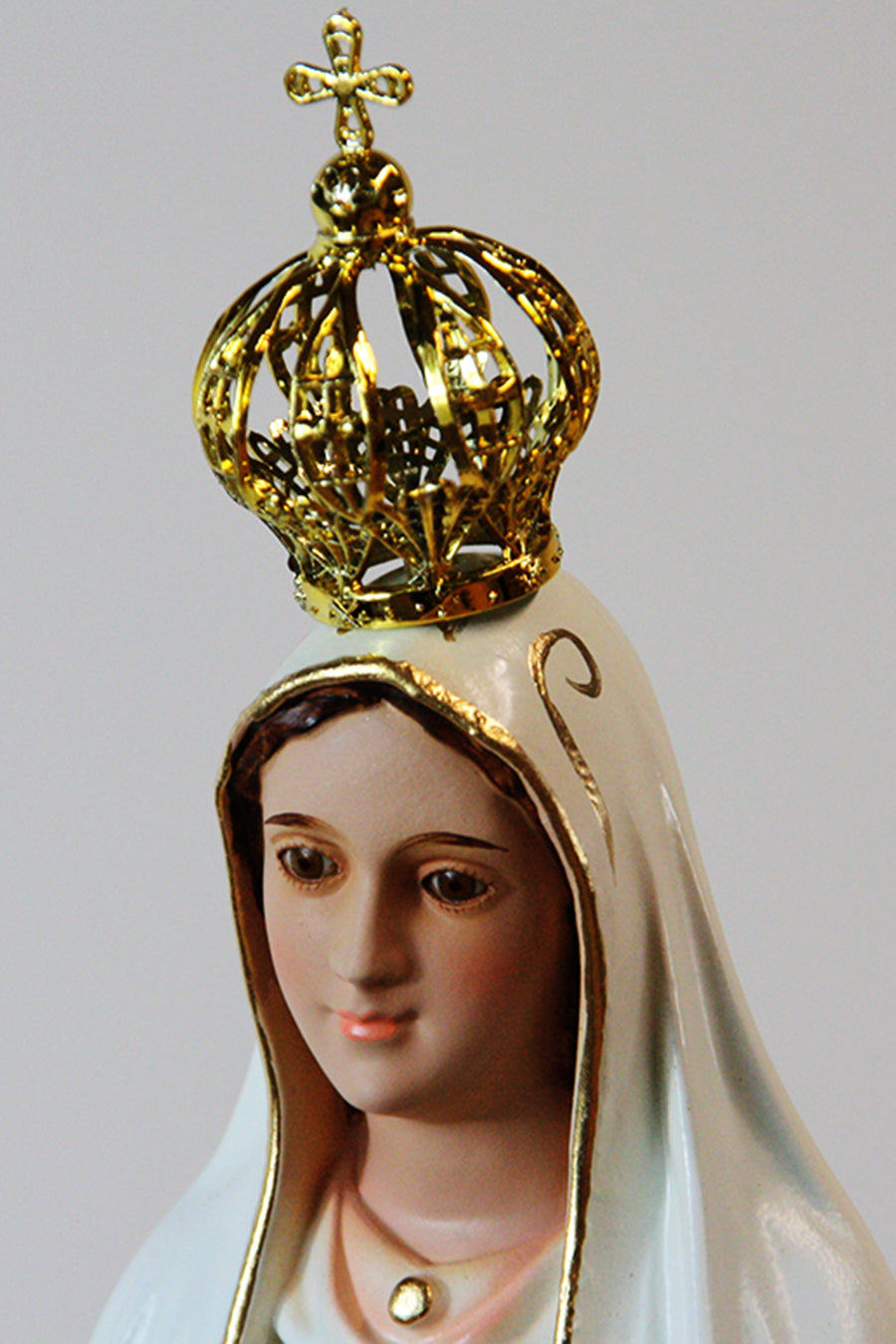 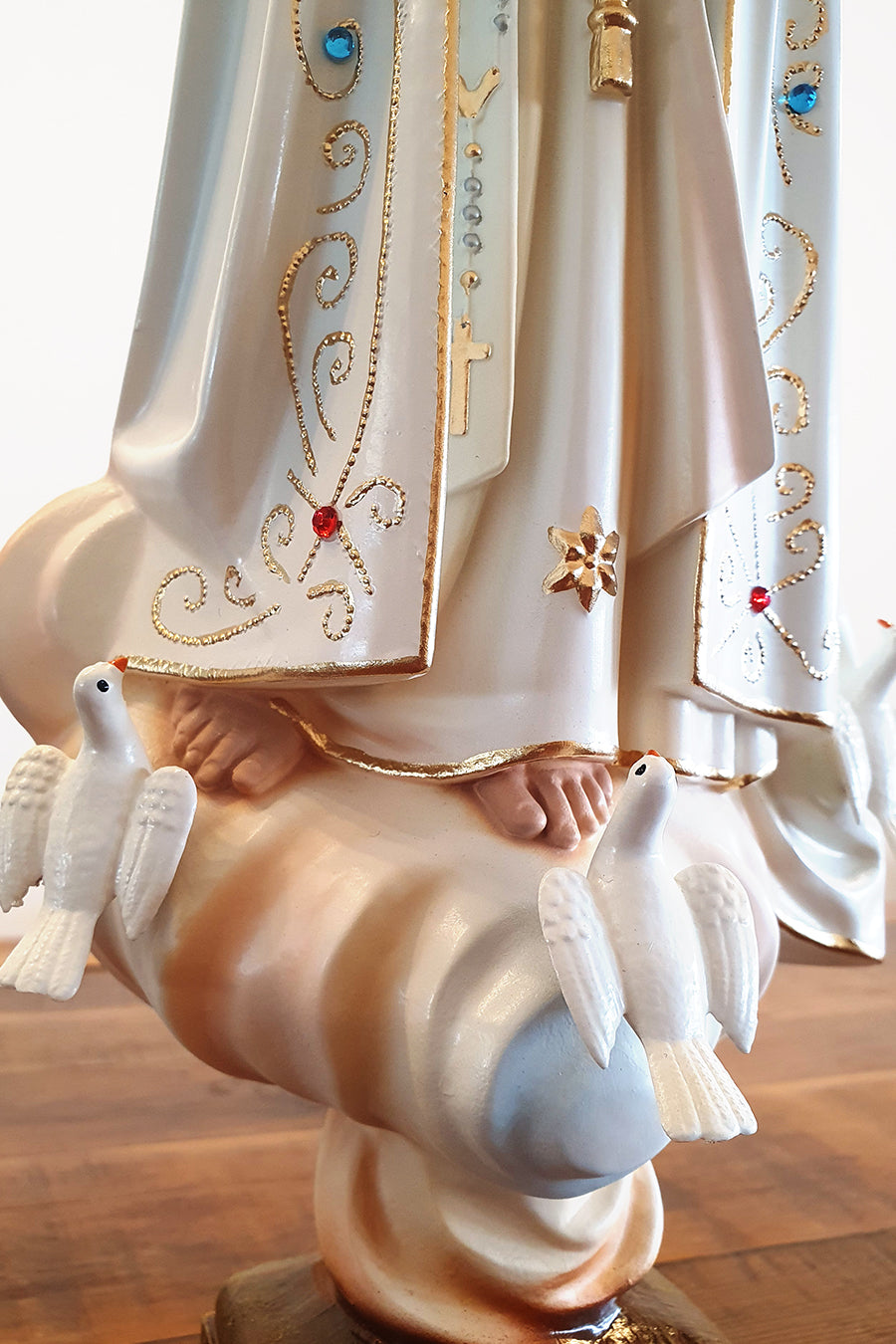 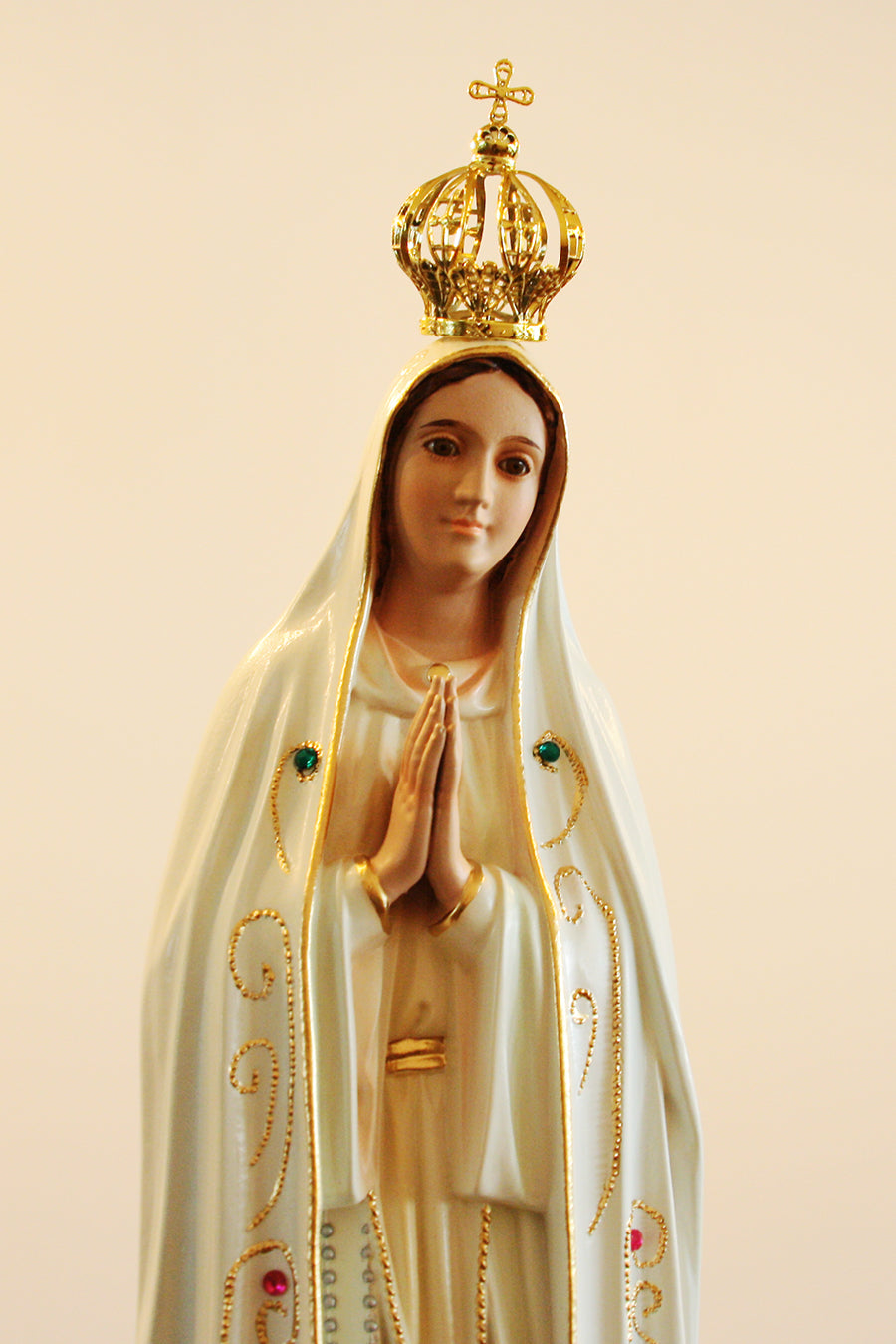 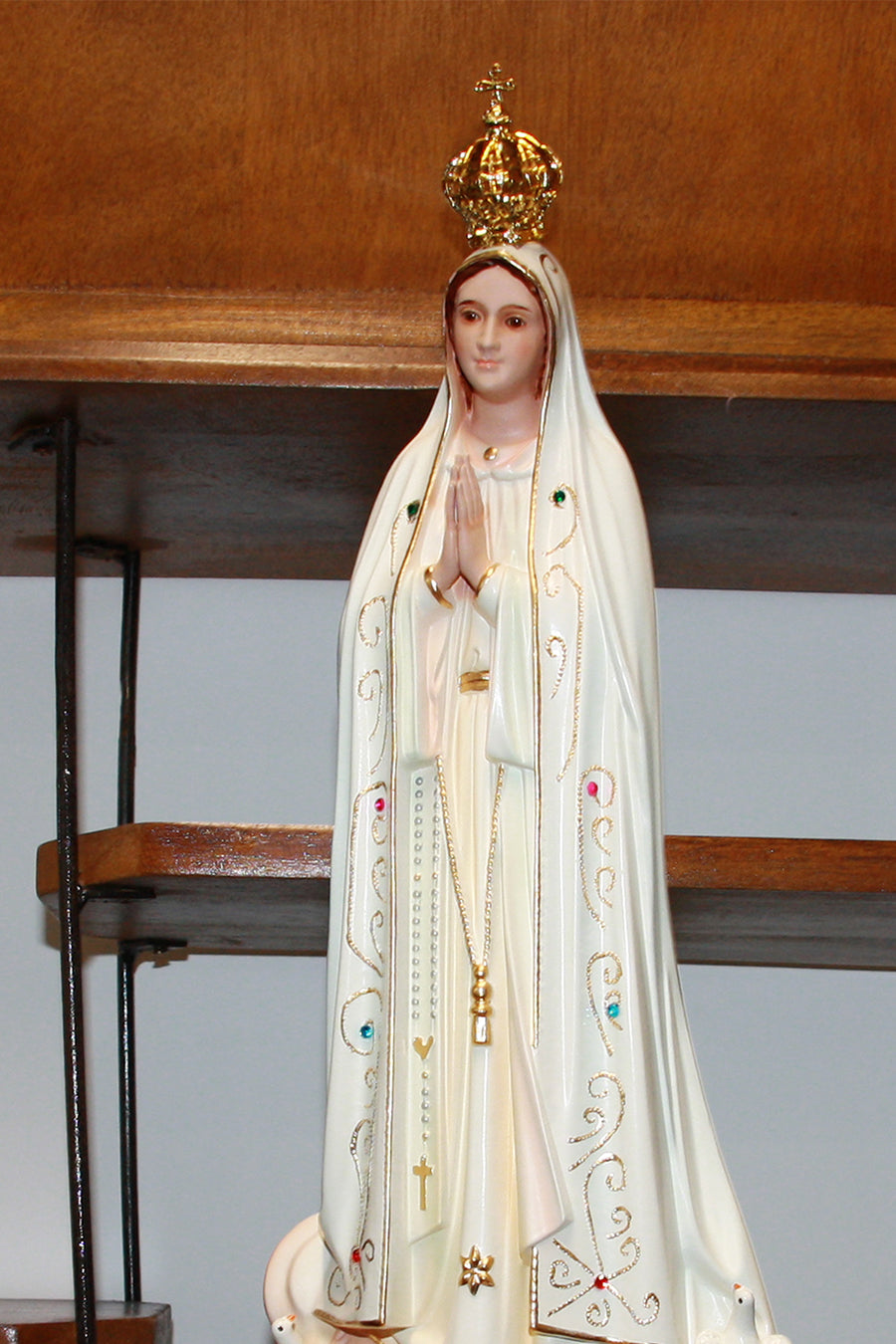 Our Lady of Fatima Official

At the crucial moment
Please rest assured that we will ship normally.
At the same time, we hope you take good care of yourself.

Our Lady of Fatima Official

Bless your home with the Miracle of Our Lady of Fatima statue.

Transform your home into a safe haven where you can seek comfort in the warm embrace of Faith and protection from life's difficulties: illness, poverty, evil intentions...

Our Lady of Fatima is followed throughout the world by thousands of pilgrims moved by their faith in the Miracle of the Sun. Hundreds claim to have been cured of illnesses and rid of other ailments by the Virgin. Among them is Pope John Paul II, who credited Fatima for her survival of the attack on her life:

"The Blessed Virgin Mary, the first of the redeemed, the first to be closely associated with the work of the Redemption, will always be our guide and model." - Pope Juan Pablo II What is the origin of the Miracle of Fatima?

Our Lady of Fátima, the Blessed Virgin Mary, is known for her appearances in 1917 to three shepherd children at Cova da Iria, in Fátima, Portugal.

The Miracle of Fatima (also known as the Miracle of the Sun) occurred between May and October on the 13th day of each month, approximately at noon. The three children: Lucía and her cousins ​​Jacinta and Francisco (7, 9 and 10 years old) were questioned by a bright lady who confided three secrets to them.

The first secret was a terrifying vision of hell, “where the souls of poor sinners go”, and contained an urgent plea from Our Lady for acts of prayer and sacrifice to save souls, with special emphasis on the recitation of the rosary and the devotion to the Immaculate Heart of Mary.

The second secret prophesied the outbreak of World War II and contained the prediction of the enormous harm that Russia would do to humanity by abandoning the Christian faith and embracing communist totalitarianism.

The third secret was not revealed until the year 2000. Its revelation coincided with the beatification of Francisco and Jacinta. It contained no cataclysmic prediction, but instead affirmed the immense suffering endured by the witnesses of the faith. Sister Lucia, the survivor of the three children, confirmed that in the vision “the Bishop dressed in white”, who prays for all the faithful, is the Pope. As he trudges toward the Cross among the corpses of the martyred, he too falls to the ground, apparently dead, under a hail of gunfire. It is possible that the vision predicted the 1981 attack on the life of Pope John Paul II. The Pope has always given credit to the Virgin for her survival.

The Miracle of the Sun occurred on October 13, when a crowd of seventy thousand people had gathered at Fatima, in response to a prophecy made by the three children. The prophecy was that the Virgin Mary would appear and perform a miracle on that date. The crowd witnessed an extraordinary zig-zag dance of the sun in the sky that lasted ten minutes that afternoon. No one had ever seen such a phenomenon. The entire crowd was amazed.

What is the Sanctuary of Fatima?

Located in the center of Portugal, the Sanctuary of Fátima built in honor of the Miracle has become the fourth largest Catholic pilgrimage site in the world, receiving between 4 and 5 million visitors each year. Both Pope John Paul II and Pope Francis have visited the Shrine to pray to Our Lady of Fatima, along with thousands of devout pilgrims.

Pilgrims gather for one of the most beautiful processions of the Catholic Faith: the Candlelight Procession. Millions of people light a candle and follow the image of Our Lady of Fatima at night as she moves through the Shrine, praying and singing her praises.